History of the House

This hotel was built by renovating 4 houses and there is a curious story about them: George Borrow, the famous British writer, was arrested in one of them, while traveling around Spain and Portugal for five years.

He printed The Bible without annotations after his atheistic stage and later conversion, so he was arrested several times.

When arriving to Fisterra in September 1837, he was arrested for being a Carlist spy, or even the very own Carlos de Borbón, known as “The Pretender” to the kingdom of Spain. On this occasion he was saved by the intervention of the spirited Antonio da Traba, who was possibly serving in the English Navy with admiral Nelson. “El valiente de Finisterre” finished the bullying determining that Borrow was English only by asking him the meaning of the words “fork” and “knife”.

All his experiences during the years that he traveled in Spain were collected in one of his books: The Bible in Spain. His story about the arrival to Fisterra is fantastic. His work is so amusing and alive that it can´t be missed.

This book was banned in Spain for many years: Manuel Azaña translated it into Spanish for the first time in 1921. It was forbidden again and not republished until the seventies. 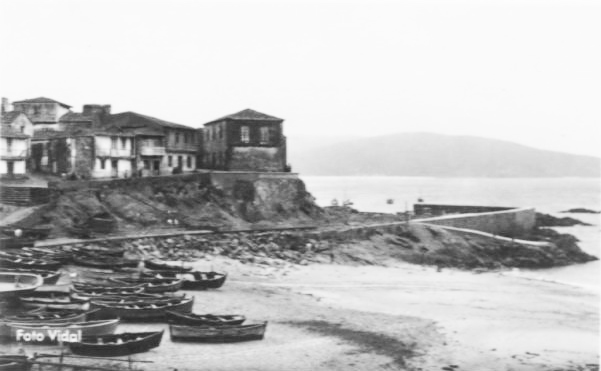 The Big House or House of the Blue Bank, was always a referent for the people of Fisterra and the bank that surrounds it was a meeting place for political debate and was also used to wait for the return of the boats; its name was taken the blue color of the seats in the Spanish National Congress.

Another characteristic of the house is that it was the first venue of silent cinema screening at the time; this fact appears in a study that indentifies the first cinemas in the north of Galicia.